The fate of The Slav Epic 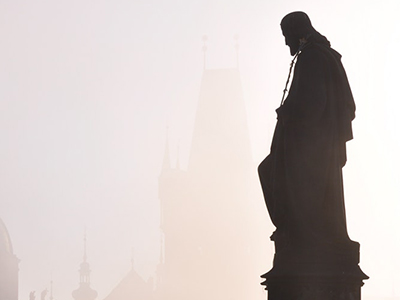 The fate of Mucha’s famous cycle of paintings is once again shrouded in uncertainty. On the13th January, The Epic was wrapped up for storage after successful exhibitions in Prague’s Municipal House and Brno’s Exhibition Centre – half of the paintings in each, the full cycle being too big for either venue. How long it will remain archived seems to be currently unknown.

Since it’s completion in 1928, Mucha’s masterpiece has seen multiple temporary, as well as more permanent, homes. The majority of its life was spent on display in a chateau in Moravský Krumlov, from 1963 up until 2011. In 2012 it was relocated to the National Gallery’s Veletržní Palace before traveling to various venues for exhibition, including Japan, where it was witnessed by 660,000 people. The Veletržní Palace was deemed unsuitable for continued display of the works, and that bring’s us to the important question – where and when will The Slav Epic find it’s rightful home?

The National Gallery’s Lapidarium, located at the Prague Exhibition Grounds, was built at the turn of the 20th Century. It housed various important historic stone sculptures from the 11th to the 20th century. In 2018, it’s refurbishment was given the go ahead by the Prague Mayor’s Office, which is to include a new wing to the rear of the original building. It is hear that The Slav Epic is proposed to be housed in a tailor-made space with the sufficient dimensions required for the artwork’s epic proportions. However, with work not yet confirmed it is unknown as to whether The Slav Epic will find its home here.

Gallery on a bridge

Prague is planning to build a new bridge over the Vltava, connecting Holešovice to Karlín. Although the project is still in its infancy, with no penciled date for construction or a finalised design, there are talks of the inclusion of a gallery atop the structure. The group behind the plan have suggested the site could be the most suitable location for The Slav Epic. Assurances of safety measures to avoid flooding of a potential gallery have been made, most notably the height above the river at which art works would sit.

Although The Slav Epic was moved from Moravský Krumlov to Prague in 2011, much to the discontent of the town’s inhabitants and The Mucha Foundation, they haven’t given up hope. The chateau that housed The Epic for nearly five decades is to go under extensive restoration, thus potentially providing a home for the artwork once again. However, it is unlikely that Moravský Krumlov and Mucha’s masterpiece will be reunited. After a lengthy court battle between John Mucha (the painter’s grandson) and the city of Prague, is was confirmed that the capital held rights to ownership of The Epic. It would therefore seem unlikely that the city would relinquish the paintings  and move them back to the Moravian town.

There have been several locations considered for housing The Slav Epic over the years including:

So it seems there are multiple options for housing Mucha’s famous work, but the question is, will any of them see realisation? And more importantly, once completed, will any be suitable for the epic proportions of the paintings?