What does The Slav Epic evoke in you? 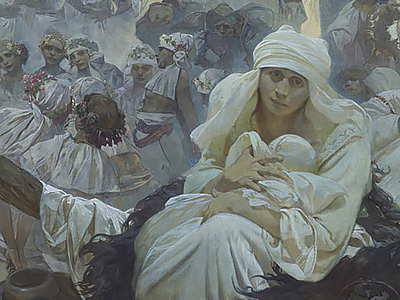 The Slav Epic is a truly unique artwork of epic proportions. The cycle of 20 large canvases form a pictorial time line of the mythological and historical establishment and struggle of the Slavic peoples. Each painting depicts a different event linked to the Slavic nations.

Mucha uses different compositions of colour, symbols and figures to present ideas, hidden messages and various phenomena through his paintings. Whilst some aspects of the artworks have clear links to particular historic events, some are down to the interpretation of the viewer. One example of this is the arguable links many of the paintings have to Romanticism, an era from which Mucha likely drew inspiration. What does The Slav Epic mean to you? How do you interpret the meaning and message of the paintings? What does The Slav Epic evoke in you? Share your opinions and feelings.