Alfons Mucha and his life 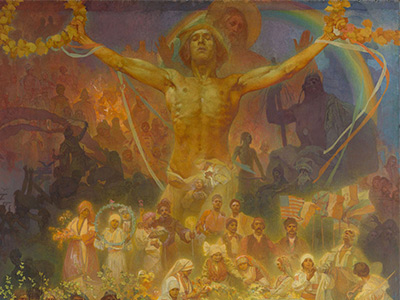 The world-famous painter and great Czech and Slavic patriot, Alfons (Alphonse) Mucha, grew up in the small town of Ivančice near Brno. As the son of a court usher, Mucha showed an early talent for drawing, and whilst attending secondary school decided to become a painter. At the age of twenty he travelled to Vienna, where he gained valuable experience as an apprentice painter of theatre scenery. Later – back to Moravia, Mucha met a wealthy count; Eduard Khuen Belasi, who nurtured his talents, commissioning him to paint several murals. Khuen Belasi went on to finance Mucha’s studies at academies in both Munich and Paris.

When rich aristocratic subsidies ended, Alfons Mucha began to make his own living with art. He rented a studio, worked endless 16 hour days on various commissions, especially in the area of decorative art. In 1894, he began to work for Sarah Bernhardt, creating a life-sized poster of the highly admired actress of that time. The portrait depicted Bernhardt in the costume of a noblewoman whose dreamy look accurately reflects the character of a theatrical figure. The poster appeared on the streets of Paris, lifting Mucha to a sudden height of fame within the Parisian society. Further posters of similar style and composition were commissioned for advertising purposes across Europe and the United States by multiple companies.